Programming errors are usually the result of an oversight of assumptions that really doesn’t hold. This may result in logical contradictions, like trying to use a non-existent object (e.g. NullPointerException) or invoking a method with an incomprehensible argument (e.g. IllegalArgumentException).

Logical errors must be corrected at design time. It doesn’t make sense to try illogical invocations in order to catch and recover from them. But we still want our programs to detect, expose and locate these bugs. Programming by contract gives us a technique to do just that.

Recoverable exceptions, on the other hand, signal exceptional cases that a correct program can and should handle gracefully. This might be network connection errors, file system errors or data input validation errors. This is what we in everyday talk refer to as error handling, fault tolerance and the like.

According to the usage guidelines of the Java exception hierarchy, as a general rule programming errors should inherit from RuntimeException whereas Error is reserved for internal errors of the Java runtime system. However, there is also differing opinions in the Java community regarding the proper use of checked vs unchecked exceptions. This has led to the widespread use of RuntimeException also for recoverable exceptions.

Valid4J prefers to use Error to signal programming errors, and is agnostic to the question of using Exception (checked) or RuntimeException (unchecked) for recoverable exceptions.

Defensive programming, don’t do it

…a common, but sad example… 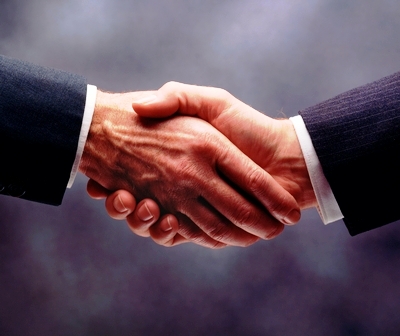 By using the mechanism of contracts, bugs in the software are instantly exposed as soon as they are detected in runtime. A contract violation means that an assumption in the software doesn’t hold. This means we are executing in an unknown state.

Never try to catch and recover from a contract violation. A bug-free application should not rely on contracts being evaluated at all. A reasonable approach would be to abort the application, possibly followed with some kind of global recovery, like restarting the application, returning a HTTP 500 response or similar.

Prefer immutable classes and check invariants at exit of constructor. This is a much simpler special case of invariants.

Using contracts it’s easy to see what assumptions we can rely on and which conditions we are to achieve. The readability of the code is improved. Any if-else statements or try-catch clauses deal with proper error handling and fault tolerance, not programming errors. Code to the point!

Contractual assumptions are evaluated at runtime and any violations will immediately be detected, exposed and located which greatly speeds up and simplifies bug fixing. Slow, boring and tedious debugging is not needed any more.

Beneficial side effects of using contracts is that it

Easy! Right? If we are using contracts to clarify the responsibilities between clients and suppliers there are a couple of things to keep in mind.

There are two types of methods in the world:

We should separate commands from queries. Our methods should have a single well-defined responsibility. Either they are commands, methods that change the current state of our program. Or they are queries, side-effect free methods that just return a result. Evaluating and verifying contracts shall not change the (perceived) program state. (Perceived that is; like acquiring & releasing a mutex may be ok, caching may be ok.)

Why? Goes without saying! Contracts are a part of the specification, not the semantics. The outcome of a contract check must not depend on how many times it has been checked (if any). A bug-free application should not rely on contracts being evaluated at all.

Provide a complete (and usable) interface for clients

Specifying preconditions is the same as putting requirements on our clients. We are essentially demanding them to fulfill their responsibilities. Make sure they also have the possibility to achieve that.

Use contracts to ensure the correctness of a program. Contracts are used to detect logical errors or internal contradictions, making sure that the collaborating classes that constitute the program fulfill their obligations. Do not use contracts to deal with situations that couldn’t be considered to be in our control, like invalid user input, network connection errors, or file system issues. Contracts are no substitute for proper error handling and recovery. 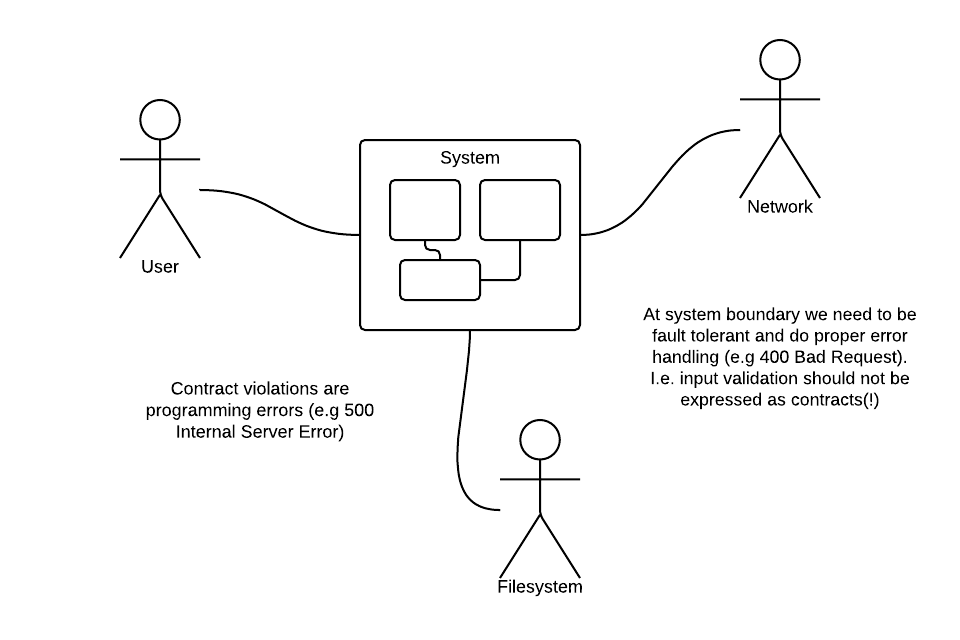 The above code is an example on how to use contracts to push a responsibility to the client. A client which doesn’t fulfill the contract has a programming error.

Below is the same code using a technique of error handling instead.

How do we choose between using contracts and/or error handling? As a designer of a class we can decide how much responsibility we can and will put on our clients. What is the anticipated usage of the class? Is it possible to require clients to fulfill certain tasks?

A guideline to bear in mind is that in a bug-free application, the contract checking should be possible to switch off. (Possible that is; we are not recommending to switch them off, though, nota bene.) Proper error handling can not be switched off since there will be clients that rely on recoverable exceptions being thrown when exceptional conditions occur.

Also remember that (recoverable) exceptions should be used for exceptional cases, not the normal flow in a program.

When using contracts in inherited classes, remember the Liskov Substititution Principle (LSP). It states that, if S is a subtype of T, then objects of type T may be replaced with objects of type S. Think, S is-a T. 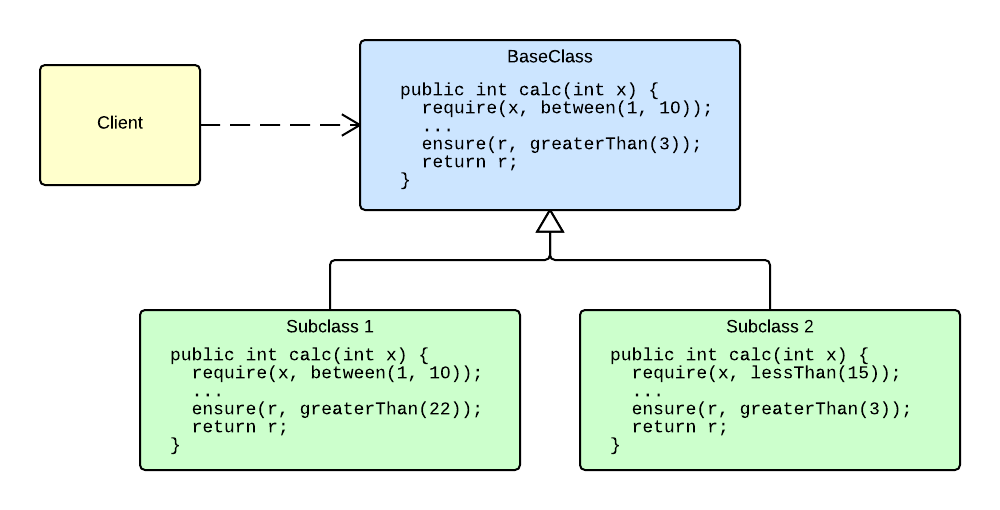 That being said, if we want to use contracts on shared mutable objects, we can’t put preconditions on the current supplier state. This is because, in a multi-threaded environment there is no way for a client to make sure that such a condition holds before making the call (effectively making the class pretty useless). 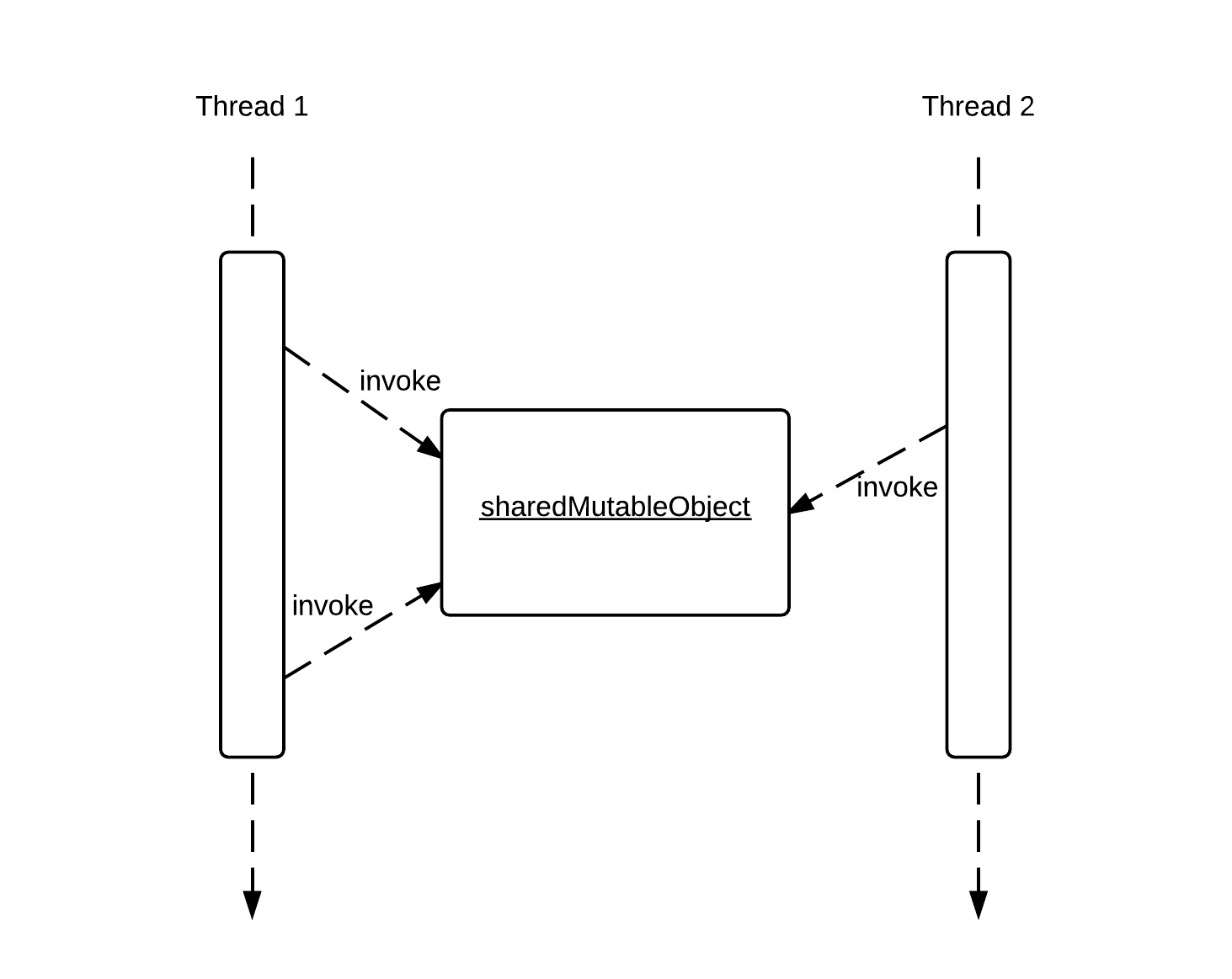 One option would be to throw a (recoverable) exception if the condition is not satisfied. In such an event the client could just catch and recover from the failure.

Another option would be to require the client to acquire exclusive access to the object prior to any invocations. If so, put contract on this!

Contracts and unit testing complement each other.

Contracts are enforced during unreliable live execution, whereas unit tests exercise the code in a safe test environment. So, make sure to leave the contracts switched on, even in production.

Contracts specify the space of allowed invocations of a method, by specifying which conditions must be satisfied prior to invocation. This knowledge may be used to exclude the “out-of-specification” space from what is unit tested, making the testing effort concentrate on the space in-specification.